7:22 p.m. | Updates below |
Quite a few professional climate skeptics have been crowing in the last few days about a 20-percent downward shift in the short-term forecast for global temperature (through 2017) from Britain’s weather and climate agency, best know as the Met Office. Here are the graphs showing the change, with the first published in 2011 (see the related release here, thanks to Leo Hickman of the Guardian) and the next one from late last month:

Met Office This was the 2011 forecast from Britain’s climate agency for global temperatures (in degrees Celsius) through the rest of the decade. A new forecast is not as warm. 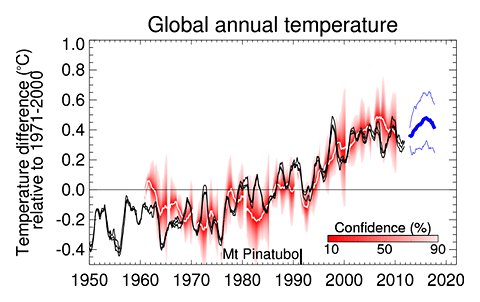 Met Office This is the 2012 forecast from Britain’s climate agency for global temperatures (in degrees Celsius) through the rest of the decade. A 2011 forecast showed more warming.

The focus of those questioning the importance of greenhouse-driven warming is not so much the forecast downgrade itself, but how it would, if it holds up, create a statistically significant span in which global temperatures have not markedly risen. While global temperatures are the highest they’ve been since formal records began in the 19th century, warming has largely stalled since 1998.