A partnership convened by the World Resources Institute

This Global Forest Watch (“GFW“) Terms of Service (“Agreement” or “Terms”), is between the World Resources Institute (“WRI”), a 501(c)(3) not-for-profit organization located in the District of Columbia, United States, and you and your company organization (“You” or“Your”).

By clicking “I agree”, you are bound by the terms of this Agreement. If you choose not to click on “I agree” you will be redirected from this website (“Site”). Your use of any portion of the Site, any information or data provided on the Site, or any services made available through the Site (the “Services”) is subject to the terms and conditions set forth herein.

For our project we wanted to create an Ethernet data logger that could take data from a temperature sensor and a PIR motion sensor.  This would allow us to graph motion and temperature over time allowing users to know when a space was most in use and perhaps whether it was being heated effectively.

Basic Description:
Arduino– The Arduino here connects collects the temperature data and movement data to the Internet as a client and posts data to the Google App Engine site every 60 seconds. An external interrupt allows for motion to be detected and polled at any time. The temperature is read just before the HTTP post is made.
Google App Engine – On this side the app engine takes the data posted from the Arduino and stores it in a simple / and probably inefficient database. If someone visits the site it uses the google graph api to make a pretty neat graph of the data over time.
Images:

The HP-67 Microcode ROM based Emulator

You must login or register to post a reply

By the end of april 2013, the VTQ-13 project came to a sussessful end: The new calculator is now in use with it’s full functionality. The first conceptual works begun in september 2011, so the project lasted for 20 months. Removing holiday times and phases, when I got no time to work on that project, there remains a net-working-time of about 11 months, one month for hardware issues, 10 months implementing the calculator’s operating system.
1.1  VTQ-13 Model description

Originally planned to be calculator similar to the beloved HP-45, it turned out to be more like a HP-27++.

The image below shows a HP-27 (image is courtesy of The HP-Museum), the shining example of my calculator in concerns of functionality.
The VTQ-13c’s catalog of features reads like this:

While most of the older HP calculators were designed as portrait models, the VTQ-13c comes in landscape format with it’s keyboard layed out similar to a mixture of an HP-97 an a voyager machine: 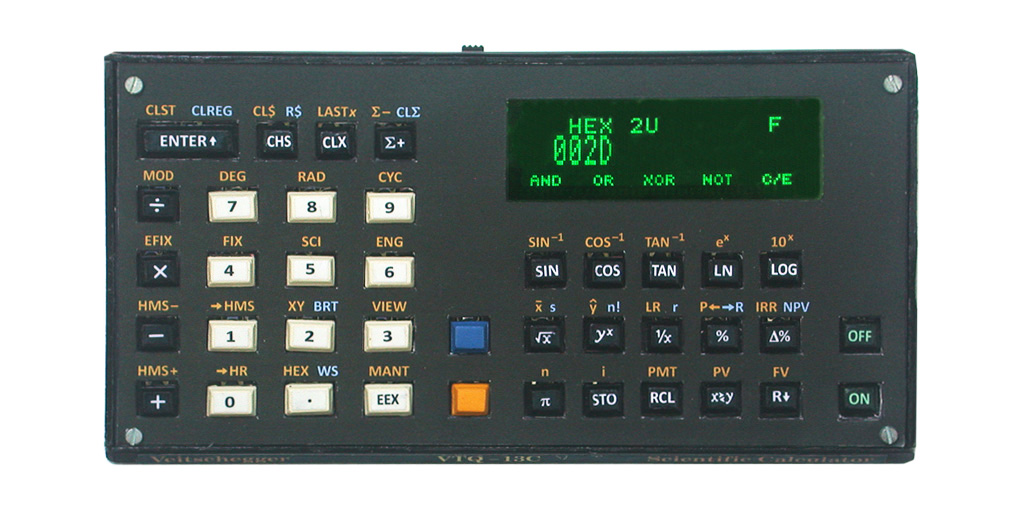 I went for this decision primarily in order to be able to place the display module optimally. But it looks nice this way doesn’t it?
There are more differences to the predecessor VTQ-9 concerning the layout: Instead of the clumsy computer’s keyboard switches I used small micro-switches and homemade key caps that give a look-and-feel similar to original HP-calculators and recuded dimensions of the case dramatically.